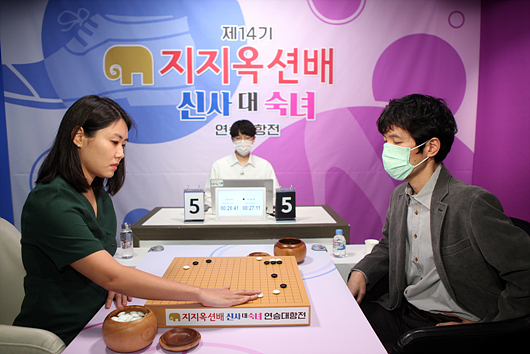 The 20th round of the 14th Korean Go veteran women's tournament was held on October 6th at the Go TV Studio of the Korean Go Academy. In the end, Coco Lee beat the veteran team leader Lee Chang-ho's ninth dan with 249 hands in the eighth dan, and led the women's team to win the championship with a record of four consecutive victories.

Prior to this, Lee Min-jin, who had won three consecutive victories over An Zuoyong, Lee Sung-jae, and Yoo Chang-hyuk-ho, played the white against Lee Chang-ho, the last player of the veteran team in this game. Lee Chang-ho had the advantage at the beginning of the game, but in the subsequent games. Coco Lee's performance was very stable, and she has been catching up fast. At the end of the game, Coco Lee successfully reversed and won four consecutive victories while leading the women's team to win the championship.

After the game, when reviewing this game, Coco Lee said: "I am very happy. There have been many difficult moments during the game. This chess game almost reversed at the end." Coco Lee also said: "I am very happy to be at the same place again after many years. I am very interesting and excited to have a winning streak in the game. The veteran players I played against are all very strong. I want to prove to chess fans and junior players that'anyone can do it' I feel very honored for this."

In the opening game on August 3, the ladies' team pioneer Jin Soojin's fifth dan faced the veteran team Jin Rong's ninth dan first to score, but in the second game, Jin Xiuzhuang's ninth dan seized the handle and secured the victory. Since then, Park Zhijuan, who is the second best of the ladies team, won 4 games in a row. The wins and losses seem to favor the women's team. However, the veteran team An Zuoyong 9dan also responded with 5 consecutive victories and tied the score again with 8-8. However, as for the women's team, with the "Queen of Winning" Lee Coun-jin's 8-dan winning streak, they won the championship without Cui Jing's 9th dan, Wu Yoozhen 7th dan, and Kim Chae-young's 6th dan playing.